The Town Council of Los Gatos approved the placement of a general sales tax measure on the ballot for the November 6, 2018 General Municipal Election.  A two-thirds (2/3) vote of the City Council was required to adopt the resolution to submit the Council’s ballot measure to the voters. A majority vote of the City's qualified voters is needed to approve the ballot measure.  Provided below is the ballot language as it will appear on November 6, 2018.

In conjunction with the aforementioned ballot language pursuant to State law, the Council introduced an Ordinance which corresponds to the measure.  The Ordinance helps safeguard the use of public funds and ensures transparency and accountability.  The Ordinance requires independent citizens’ oversight and annual mandatory financial audits.  Both the Resolution and the Ordinance contain additional pertinent information associated with the measure.  Copies of the Resolution and Ordinance can be viewed here:

The Town Attorney has prepared the following Impartial Analysis of the proposed measure.  The Arguments for and against the Measure are also below:

What is a General Sales Tax?

California, like the majority of states, utilizes a Sales and Use Tax (SUT). The sales tax, begun in 1933, is imposed on retailers selling tangible goods in California.  The sales tax provides for certain exemptions and is not levied on food purchased as groceries or on prescription medications, in addition to other exemptions.  The use tax, begun in 1935, is imposed on the users of a product purchased out of state and brought into California for use (such as a mail order item from another state).

A “general tax” is an SUT which may be used for any public purpose.  The funds from a general tax are fully discretionary and may be deposited into the General Fund.  A majority vote (50% + 1) of the electorate is required to impose, increase, or extend a general tax.  A general tax may only be put on the ballot at the same general election when the Town Council election is held, unless the Council unanimously finds that there is an urgent need to impose the tax measure.

How did the Town Council decide to place a General Revenue Tax Measure on the ballot?

In 2015, the Town Council formed an Ad Hoc Citizen Committee to identify additional revenue options to address the Town’s existing and future infrastructure needs.  The Committee was comprised of two Councilmembers and three residents.  In June of 2016 the Ad Hoc Committee unanimously recommended that the Town Council consider adopting a resolution to place a general purpose, half-cent sales tax with a 25-year sunset on the November 2016 General Election ballot.   The Town Council subsequently opted to place a 2% increase in the Transient Occupancy Tax (TOT) on the November 2016 ballot.   Additional information regarding the Ad Hoc Committee and Sales Tax deliberations from 2016 can be found at:

On October 9, 2017, the Town Council Finance Committee initiated discussions regarding placing a 1/8 cent general sales tax on the November 2018 ballot for community consideration.  The Committee discussed a staff report that provided information on State of California tax regulation, Los Gatos sale tax receipt history, sales tax scenario analysis, and past consideration of revenue measures.  For additional information, the complete staff report can be found under item #3 of the following agenda:

On November 7, 2017, the Town Council reviewed the recommendation of the Council Finance Committee to proceed with preparing a ballot measure to place a 1/8 cent general sales tax on the November 2018 ballot for Los Gatos priorities.  After listening to public testimony and discussing the topic, the Town Council directed staff to have the Council Finance Committee review and discuss both the options of a general sales tax and a special sales tax.  For additional information, the complete staff report can be found under Item #19 of the following agenda:

On December 4, 2017, the Town Council Finance Committee received a staff report which provided information on the six sales tax measures conducted in Santa Clara County since 2008.  In addition, the report provided a chronology of essential administrative and Council steps necessary to place a measure on the November ballot.  For additional information, the complete staff report can be found under Item #4 of the following agenda:

On February 12, 2018, the Town Council Finance Committee received a staff presentation of the implications of sensitivity analysis on the Town’s budget projections.  In addition, the Finance Committee received a staff report which provided sample ballot language for three general sales tax measures and three special sales tax measures.  At the conclusion of the meeting, the Finance Committee voting members did not provide a consensus recommendation and referred the sample ballot language to the full Council.  For additional information regarding the sensitivity presentation and the complete staff report, please refer to Item #4 and Item #5 of the following agenda:

On March 6, 2018, the Town Council received the information from the February 12, 2018 Council Finance Committee meeting.  At the conclusion of public comment and Town Council deliberations, staff was directed to move forward with an 1/8 cent general sales tax using “sample ballot language #2” contained on page 3 of the staff report.  The motion passed by a 4/5 vote.   For additional information, the complete staff report and attachments can be found under Item #7 of the following agenda:

On June 5, 2018, the Town Council received a Resolution for adoption and the introduction of an Ordinance to submit a general sales tax measure to the voters during the November 6, 2018, general municipal election.  After public testimony and at the conclusion of the discussion, the Council adopted the Resolution and introduced the Ordinance.  The motion was approved by Council by a 4/5 vote.   For additional information, the complete staff report and attachments can be found under Item #17 of the following agenda:

On June 19, 2018, the Town Council adopted the Ordinance introduced at the Town Council meeting of June 5, 2018, imposing a general tax for a period of twenty years if a majority of the Town’s qualified voters approve the ballot measure.  The motion was approved by Council by a 4/5 vote.  For additional information, the complete staff report and attachments can be found under Item #6 of the following agenda:

What is the current sales tax rate in Los Gatos and who receives the revenue?

How does the 2% cap affect Los Gatos?

Based on the current taxes imposed by other local jurisdictions (1.75%) there is only 0.25% of local jurisdiction taxing capacity remaining without breeching the state imposed 2.0% cap.  If another local taxing jurisdiction(s) was to successfully impose sales taxes of 0.25% or greater, Los Gatos would be precluded from ever imposing a dedicated sales tax for Los Gatos without a legislative cure at the State level.

The 2% cap has been in effect since 2003 with limited exemptions adopted statewide since its enactment.  The Legislative record indicates that exemptions previously granted to the 2% statutory cap for transactions and use taxes have primarily supported countywide transportation programs.  In addition, the exemption has been used on a limited basis to address fiscal emergencies.

Do any other local jurisdictions have a dedicated sales tax?

What does an eighth-cent sales tax increase equal?

The Town’s sales tax consultant MuniServices estimates that an eighth-cent sales tax increase would equate to approximately $800,000 in additional annual revenue.  The following table illustrates what enacting a one-eighth cent ($0.125%) sale tax would equate to for various purchase amounts.

Did the Town consider cutting expenditures in addition to revenue measures?

As an employer that provides mostly services, the majority of the Town’s expenses are related to personnel costs.  As the chart below illustrates, since 2001 the Town organization utilized reductions in fulltime equivalent benefited employees (FTE’s) during the last two recessions and ultimately downsized the organization approximately twenty percent. 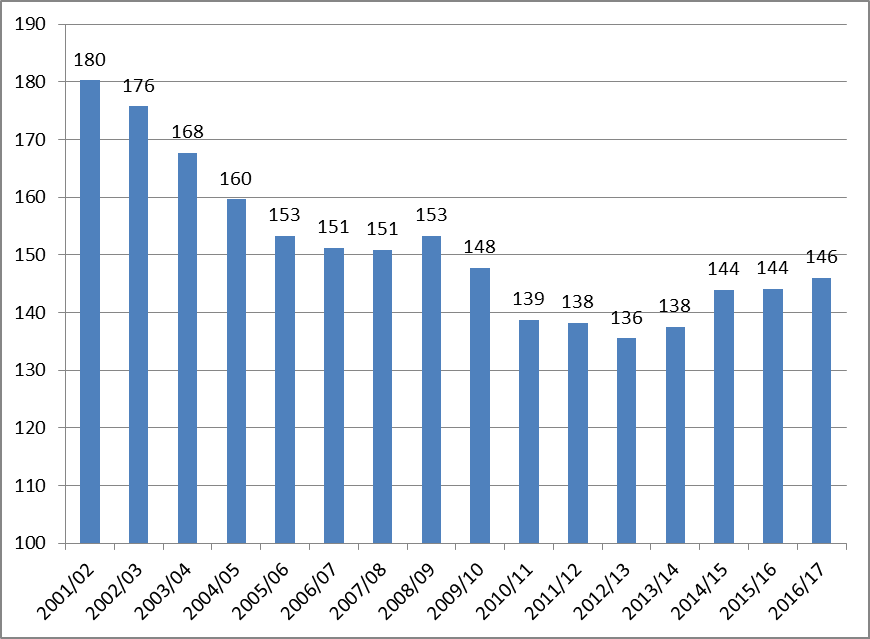 What are the $70.0 million in unfunded Infrastructure needs mentioned in the Resolution and the Ordinance?

As stated in the Ordinance and Resolution, the Town has approximately $70.0 million in unfunded maintenance, equipment, and infrastructure needs.  The $70.0 million is a conservative compilation of unfunded needs (specific/general) identified from various public Council actions, staff reports, and other public reports.  The following table illustrates a sampling of specific items that have been identified throughout the years.